Some of the best culinary, musical and costume identities of Vietnam, including the central province of Thua Thien-Hue, were introduced to Asian-Pacific guests at a cultural night in Hue city on September 27.

The event, themed “Stillness of Sense and Soul: Women Empowerment and Cultural Identity”, was held on the fringe of the ongoing APEC Women and the Economy Forum.

Narrated by storyteller Trac Thuy Mieu, the night at the Hue Culture Museum, located on the bank of the Huong River, told participants five stories about the life of royal families in the past, which was re-enacted by actors and actresses.

Through exhibitions at the event, guests also had a chance to gain an insight into modern designs of “ao dai” (traditional long dress of Vietnam) by local young designers, along with rare ingredients for the special vegetarian dishes served during the night. 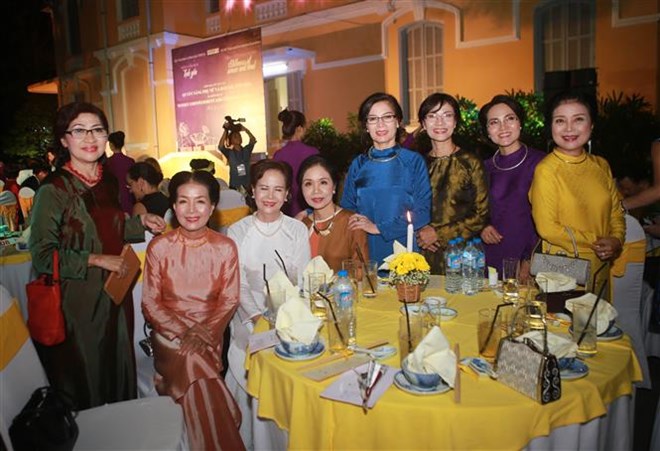 In her speech, President of Ho Chi Minh City’s Peace and Development Foundation Ton Nu Thi Ninh, an organiser of the event, said the cultural night was held on the sidelines of the women and the economy forum because economy and culture cannot be disassociated and respecting culture will help ensure sustainable economic development. Culture also directly contributes to economic growth such as through tourism, film industry and entertainment activities.

Meanwhile, women play a key role in preserving and promoting cultural identities in economic activities, which can also be seen through female artisans, she noted, adding that Thua Thien-Hue province and its Hue city is an outstanding example of preserving and bringing into play culture in order to serve economic and social development.

The 2017 APEC Women and the Economy Forum is taking place in Hue from September 26 to 29 under the theme “Enhancing women’s economic inclusion and empowerment in the changing world”.

It is part of a series of activities throughout the APEC Year 2017 in Vietnam, which joined the Asia-Pacific Economic Cooperation (APEC) Forum in 1998.

“Russian Cultural Days in Vietnam” on the horizon Monday, October 2, 2017

National Times is the English E- newspaper of Ministry of Culture, Sports and Tourism, Socialist Republic of Viet Nam.

License No. 220/GP-BTTTT (April 29, 2016) granted by Ministry of Information and Communication, Socialist Republic of Viet Nam